by Daily Mail
in Entretenimiento
0 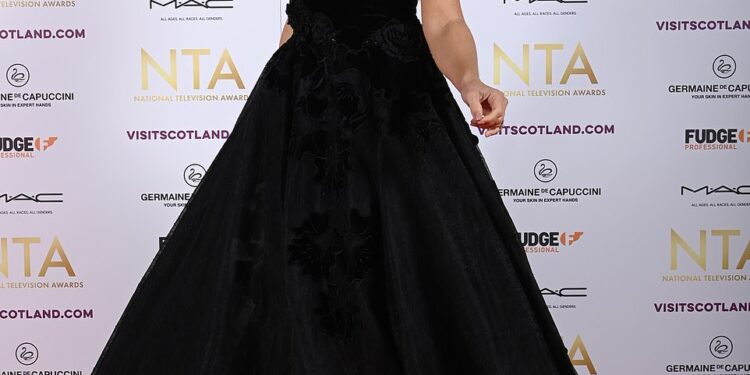 The stars were out in force on Thursday night as the great and good of British television descended upon Wembley’s OVO Arena, London, for the 2022 National Television Awards.

Leading the red carpet glamour for the 27th annual ceremony was Holly Willoughby, who looked stunning in a dramatic black strapless ballgown.

Holly’s voluminous dress featured a velvet trim and intricate lace floral details at the front, with the bodice perfectly cinching her in at the waist.

She swept her blonde locks up into an elegant up ‘do, finishing things off with pretty drop earrings and a dewy make-up palette.

Meanwhile, fresh from her announcement as the new Love Island host, Maya Jama looked incredible as she donned a Grecian-style white dress on the red carpet.

The stunning outfit featured a one-shouldered design and draping around the middle, with the dress finished off with a sweeping train. 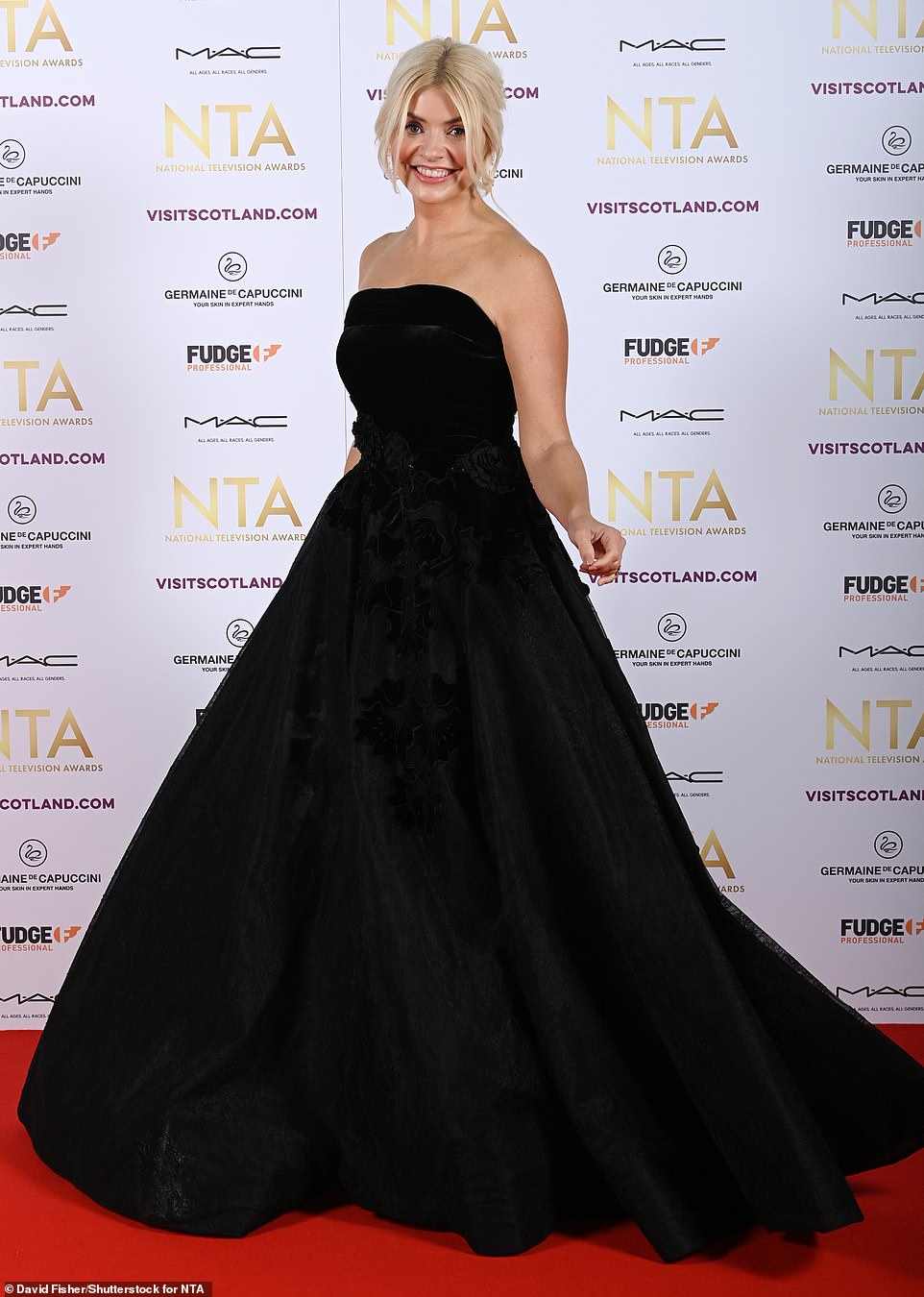 Gorgeous: Leading the red carpet glamour for the 27th annual ceremony was Holly Willoughby, who looked stunning in a dramatic black strapless ballgown

Making a statement: The This Morning host, 41, was all smiles as she walked the red carpet amid controversy surrounding accusations she and co-star Phillip Schofield jumped the queue to see the late Queen Elizabeth II lying in state last month 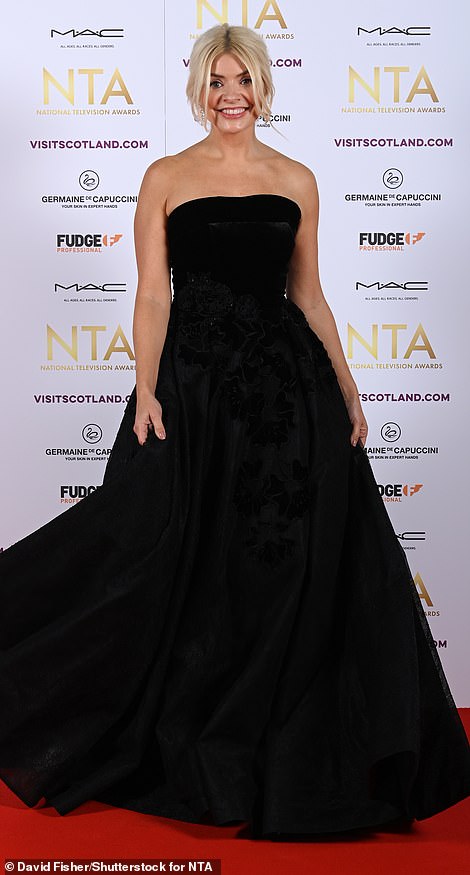 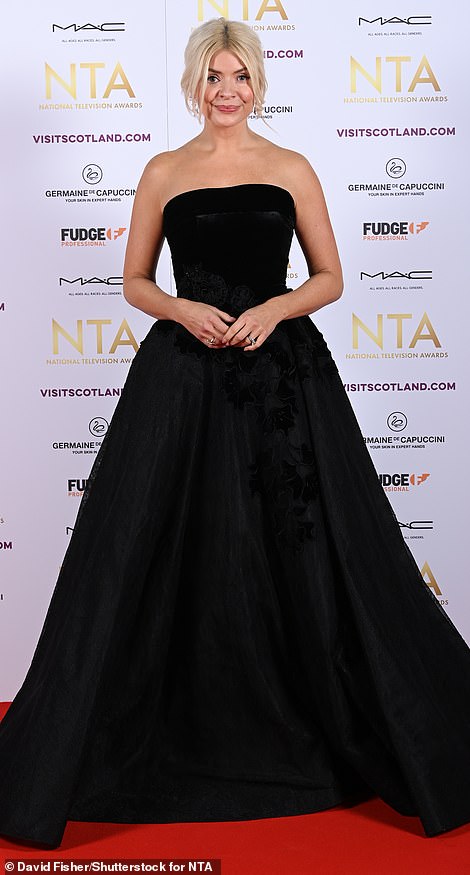 Stealing the show: Holly’s voluminous dress featured a velvet trim and intricate lace floral details at the front, with the bodice perfectly cinching her in at the waist

Meanwhile, Rochelle Humes dressed to impress in a figure hugging black gown which featured a striking striped detail down the side.

The This Morning presenter’s gown featured a racy cut-out detail at the front and a daring open back, with the dress perfectly hugging her incredible figure.

The former TOWIE star, 37, looked sensational in the shimmering tiered number, which she teamed a pair of barely-there gold heels. 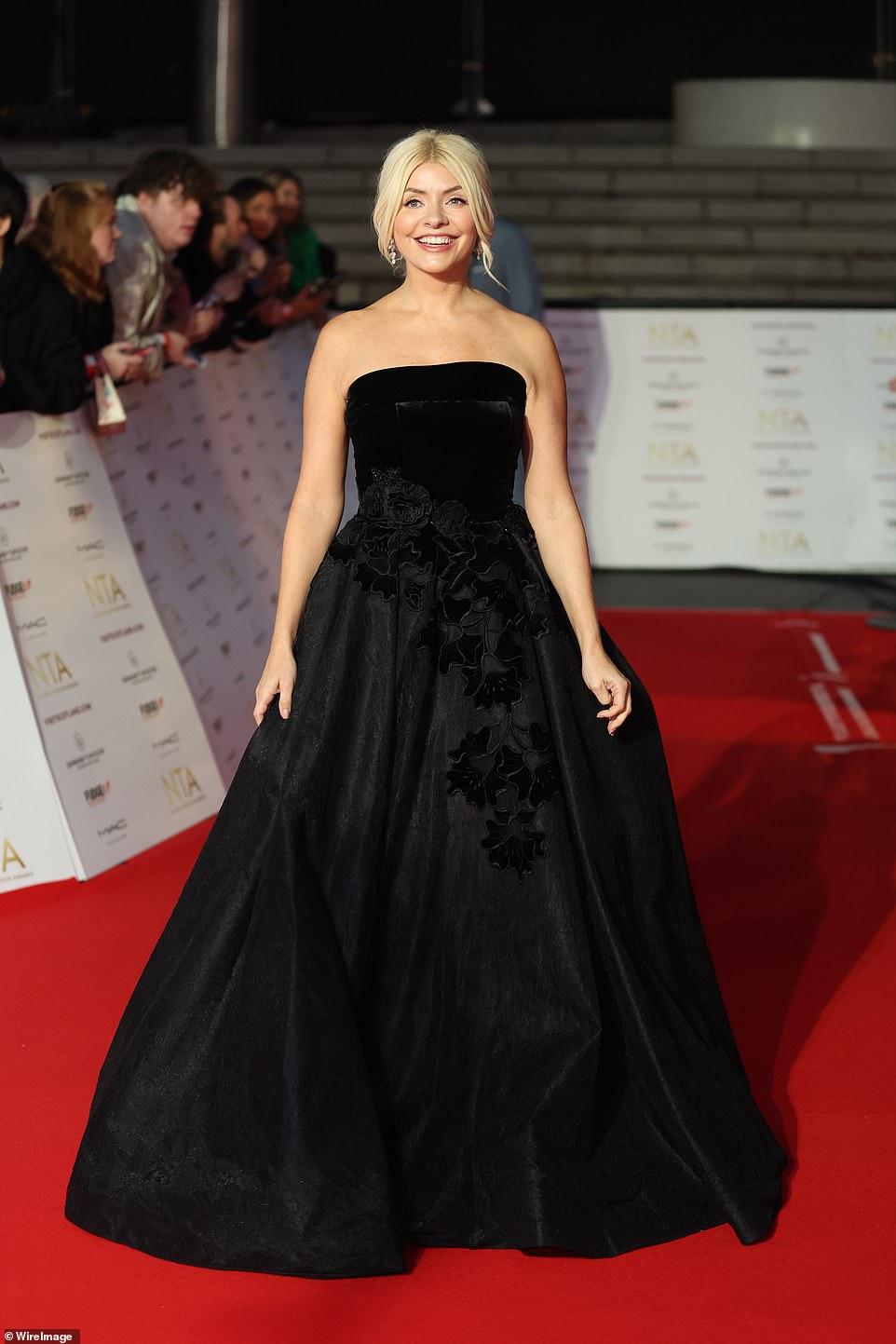 Belle of the ball: All eyes were certainly on Holly as she graced the glamorous red carpet

She swept her raven locks into a sleek ponytail for the evening, while she ensured she looked her best with a glam palette of make-up.

This year’s NTAs are broadcasting live from a brand new venue of Wembley’s OVO Arena with Joel Dommett hosting.

Sir Lenny Henry is to be presented with the coveted gold Special Recognition Award at the annual ceremony on Thursday night.

This year’s National Television Awards will honour the 64-year-old and his trailblazing career in UK television, which has endured for nearly 50 years.

Celebrity fans will be seen paying tribute to the comedian and fundraising Comic Relief frontman when the awards are broadcast live on ITV from the OVO Arena, Wembley.

Sir Lenny has been a mainstay on TV for nearly 50 years, starting with his 1975 victory on New Faces at the age of 16 which led to further acclaim on such era-defining shows as Tiswas and Three of a Kind. 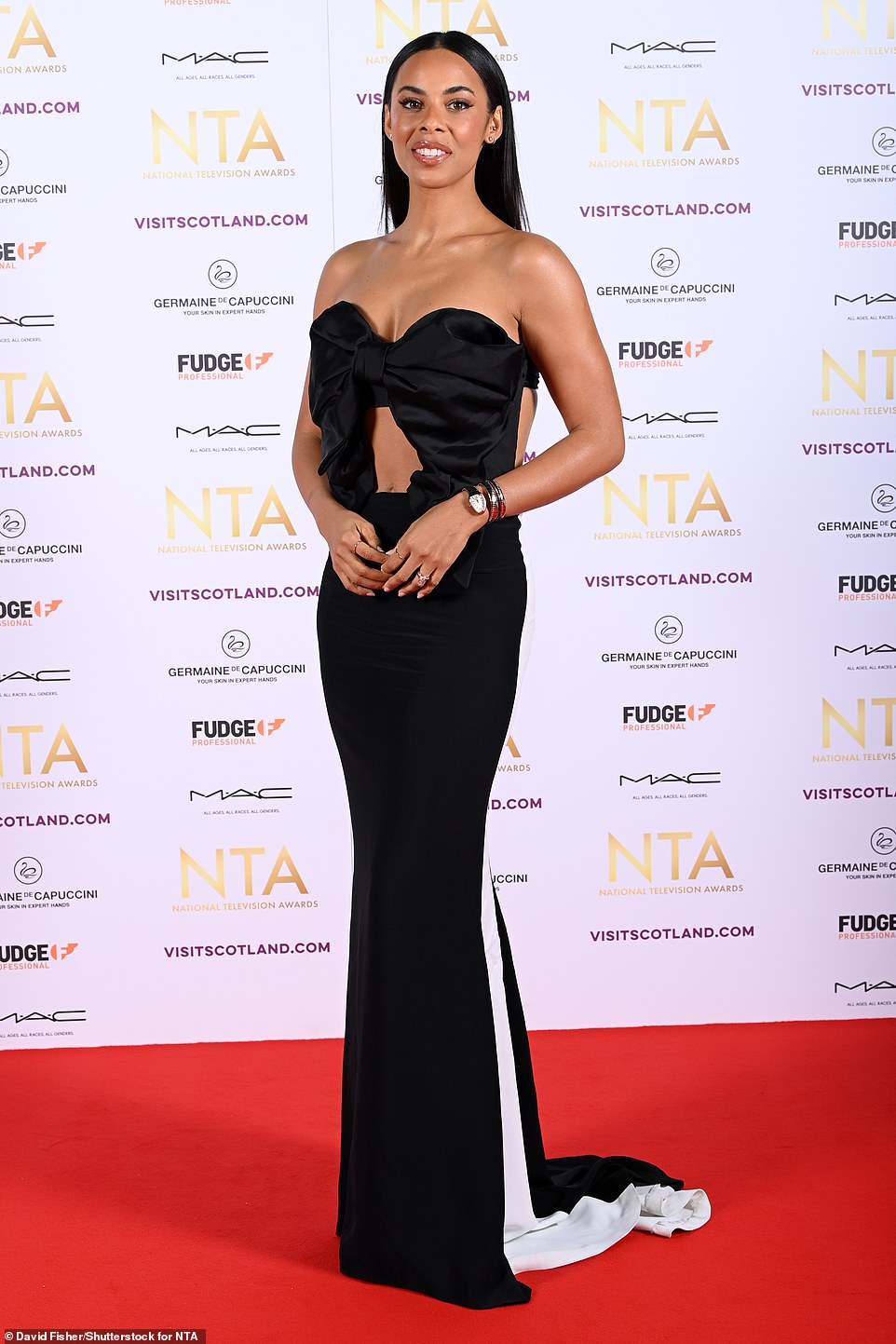 Stunner: Meanwhile, Rochelle Humes dressed to impress in a figure hugging black gown which featured a striking striped detail down the side

Breaking new ground for black talent, he went on to experience huge success with his own sketch comedy series before playing a key role in the formation of Comic Relief.

More recent projects have seen him diversify into acting, most notably on stage as Othello and on screen in the big-budget Amazon Prime series, Lord of the Rings: the Rings of Power.

Among those congratulating Sir Lenny for his achievements as a writer, campaigner, comedian and presenter will be Hollywood superstar Whoopi Goldberg, who says, ‘If you want to know what a superhero looks like, take a look at Sir Lenny Henry.’

There will be two notable faces missing from Thursday’s NTAs ceremony though as MailOnline revealed on Wednesday that Ant and Dec have pulled out of attending after being struck down with Covid.

The TV duo, who have won best presenter at the NTAs for 20 consecutive years, are suffering from flu-like symptoms and are ‘bed bound’ with the contagious infection.

A Britain’s Got Talent spokesperson announced on Wednesday that the pair are ‘unwell’ and won’t be working until they recover.

A source told MailOnline: ‘Ant and Dec are gutted. They love the NTAs, it’s the best night in TV, and for them it’s an event they always look forward to.

‘They’re both feeling really poorly but will be watching the show from bed and hope to be well and working again soon.’

A spokesperson for Ant and Dec told MailOnline: ‘After both feeling unwell Ant and Dec have tested for Covid and unfortunately have both tested positive.

‘The duo will be postponing work commitments whilst they recover.’

The pair confirmed the news on their Instagram account, sharing a picture of their positive tests as they quipped: ‘we even get ill together!’

Their absence at the star-studded NTAs won’t go unnoticed by viewers, who have voted for Ant and Dec to win best presenter for over two decades.

The comedian, 37, describes the This Morning host, 47, as a ‘force of nature’ and says if anyone can beat the Geordies, it’s her.

But Joel is keen to stress that Ant and Dec, who have bowed out of tonight’s ceremony after testing positive for Covid, are still very much at the peak of their powers and another victory would be deserved.

Speaking exclusively to MailOnline ahead of Thursday’s ceremony, Joel said: ‘Alison is very popular… it could be the year for Alison to break Ant and Dec’s streak.

‘For me it’s a win, win situation and I’m sure it is for them as well.

On Alison’s hopes, he added: ‘But If it was to go to anyone else then I would be happy for it to go to Alison – she’s a wonderful force of nature, very infectious, and she’s always been that way.

‘Since I met her 10 years ago, she’s always been like that.

‘She has been on TV for so long and has become this main presenter the last couple of years, but she was on Big Brother, I’m A Celeb, she’s had a hell of a career.’

Elsewhere, Alison’s ITV show This Morning will compete with The Chase, The Repair Shop and Loose Women for the Daytime Award. 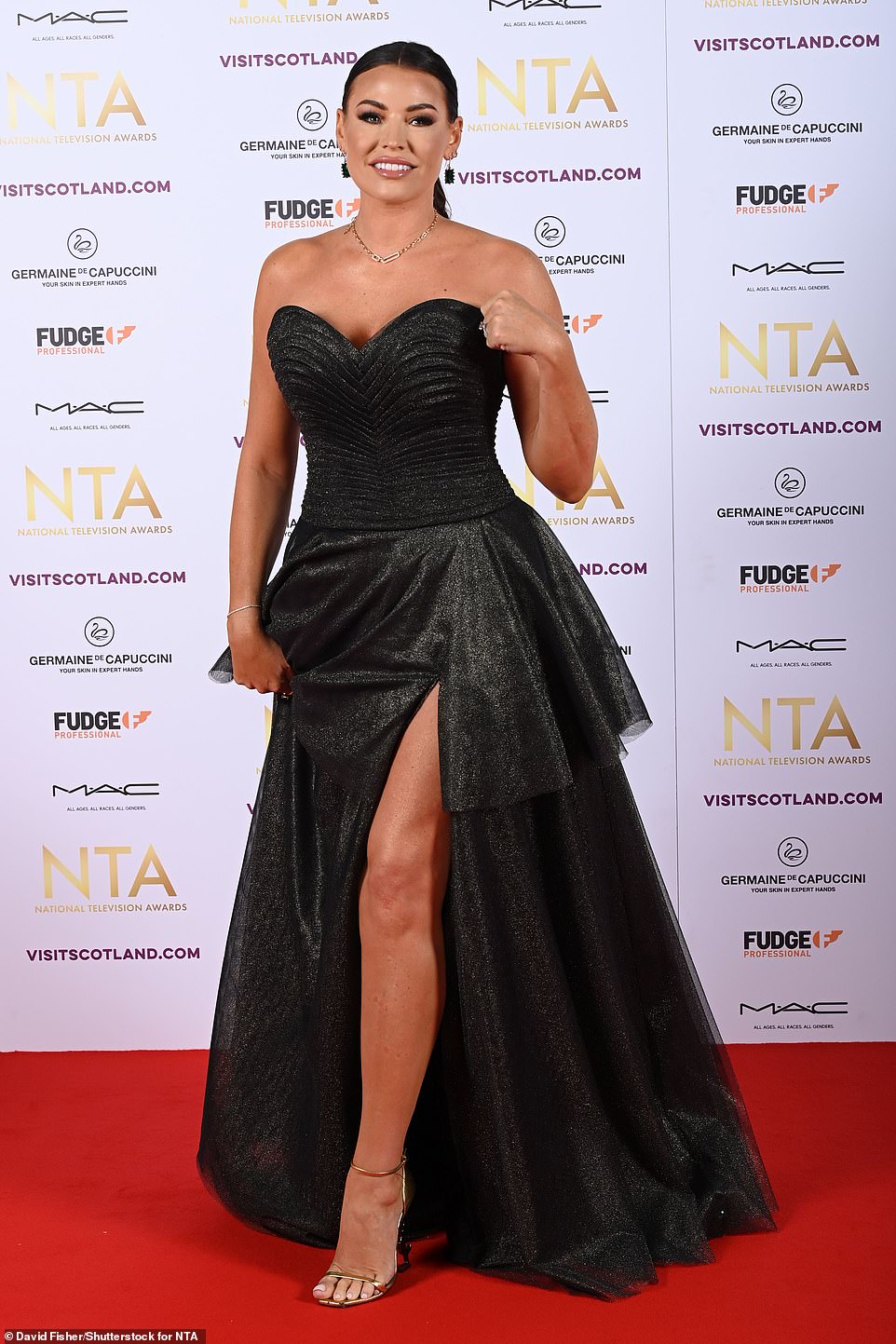 The Australian show has been nominated for one final final gong at the upcoming ceremony, after its 37 year TV reign ended with an emotional finale in July.

Tom Parker – who died aged 33 in March following a battle with brain cancer – receives a posthumous nomination for his moving documentary, Inside My Head.

This year’s NTA shortlist features more streamers than ever before, reflecting the changing broadcasting landscape.

The likes of Heartstopper, After Life, Sex Education, Bridgerton and Clarkson’s Farm prove the sheer breadth of programming that the digital providers now offer.

Four productions that set pulses racing for very different reasons compete for the New Drama award. Heartstopper became an instant coming-of-age classic, while This is Going to Hurt provided a visceral look at life on the NHS frontline. 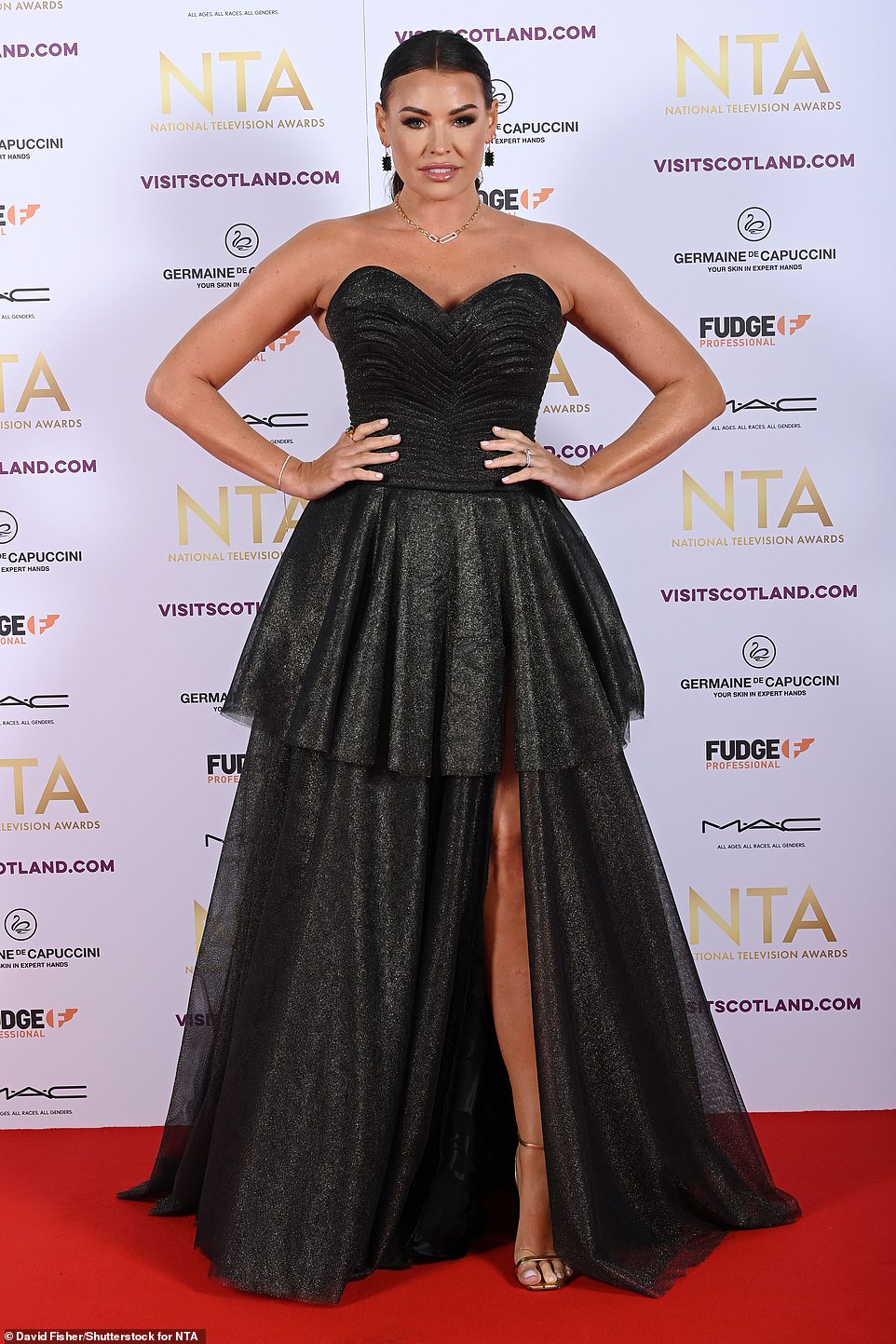 Fabulous: The former TOWIE star, 37, looked sensational in the shimmering tiered number, which she teamed a pair of barely-there gold heels

Time, meanwhile, took us behind bars to show us the brutal realities of prison, and Trigger Point proved to be an incendiary Sunday-night hit.

The Talent Show contenders each gave us showstopping moments, with Krystal Versace becoming the youngest ever winner of RuPaul’s Drag Race UK, while Rose Ayling-Ellis gave us a glimpse into her world with a silent Strictly Come Dancing routine.

The private lives of well-known faces were revealed in the candid Authored Documentary category.

Inaugural winner Kate Garraway gave an update on her husband’s treatment in Caring for Derek, and Katie Price shared her son’s next chapter in What Harvey Did Next.

Plus, Julia Bradbury charted her medical journey in Breast Cancer & Me, Paddy and Christine McGuinness shed light on disability in Our Family and Autism, while The Wanted’s Tom receives a nomination for his moving cancer study.

Elsewhere, comic Axel Blake wowed crowds on Britain’s Got Talent and Natalie Imbruglia kept us guessing as the triumphing costumed performer on The Masked Singer.

There were head-turning entrances and exits in the Drama Performance category, with Vicky McClure fraying nerves in the debut of Trigger Point, while Cillian Murphy (Peaky Blinders) and Nicola Walker (The Split) both said goodbye to beloved roles.

The Bruce Forsyth Entertainment Award continues to honour those who keep the spirit of consummate showman Brucie alive.

Two Ant & Dec favourites – Saturday Night Takeaway and I’m A Celebrity…Get Me Out of Here! – are in contention, with competition coming from often-surreal but always-hilarious Taskmaster and A-lister magnet The Graham Norton Show.

In Comedy the heartbreaking final series of Ricky Gervais’ After Life takes on the finely tuned farce of Not Going Out.

Also in contention for the coveted award are Sex Education and Derry Girls, which delivered a fittingly emotional finale that left viewers wanting more.

This Is Going To Hurt

Julia Bradbury: Breast Cancer and Me

Katie Price: What Harvey Did Next

Paddy and Christine McGuinness: Our Family and Autism

Tom Parker: Inside My Head

Paul O’Grady: For the Love of Dogs

The Great British Bake Off

I’m A Celebrity… Get Me Out Of Here!

In for a Penny

No Result
View All Result